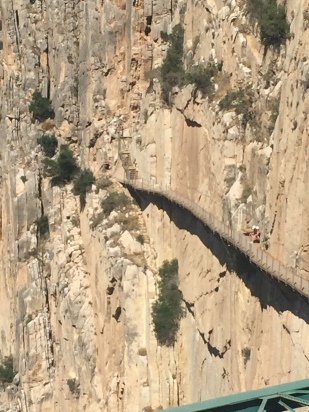 I was standing on a three foot wide wooden walkway, the walkway was suspended from the side of a towering cliff.  Gusts of wind blasted me, while I held my helmet to my head with my hand, and plaster my body against the canyon wall to stay upright. I was beginning to question my decision to be there.

I had vowed to attempt to do things that made me nervous. Heights made me nervous. That is how I ended up agreeing to go to Malaga, Spain, where we walked the Caminito Del Rey. This four mile trek was once known as the world’s most dangerous walkway. People had died on this path, however it had been closed for years for refurbishment, and reopened to the public.

The path was bolted to the cliff wall from beneath, with the cliff on the right side and a safety fence on the left. I questioned the safety of this however, as it consisted of open wire fencing  placed between intermittent posts, topped with elbow height heavy gauge wire as a railing .

The purpose of that fence was apparently to keep me from being blown off the walkway into the canyon below. Clutching tightly to Hubbys hand, I walked sticking closely to the cliff, not venturing towards the fence.

With each step I became increasingly  more comfortable. Eventually I managed to loosen the grip on Hubbys hand, letting him get circulation back into his fingers. After several minutes I made my way towards the center of the path, not holding onto anything or anyone. Eyes focused forward to the path ahead, never looking off the the openness  of the fencing on my left.

We had been walking for about half an hour before I finally inched my way to the very edge.  With a white knuckle grip on the wire, and the thundering of panic in my ears, I looked down for the first time.

Wow! what a view.  The river flows quietly 300 feet below, the striations in the rock formations were mesmerizing. I gathered enough courage to bend over the rail, and I saw a pair of sunglasses that had fallen to rest on an outcropping of rock several feet below. Note to self, hang on to the Ray-Bans.

At a point where the cliff, and the path jut out, there was platform. This platform extended out beyond the hanging wooden walkway, sides and bottom made of glass.  It appeared to be suspended in the air, magically floating above the river.

Posted near the platform was a sign, indicating that the maximum capacity of the platform was four people. There were already 2 people out there when we approached. It seemed to me, that one of the guys out there should count as two people. I point to the large, bright yellow sign, to make sure Hubby has made note of it. He was ready to add our weight to the platform, I was not. I insisted that we wait until the others had moved on, before we took our turn.

I stepped out, clutching the railing with both hands.  I bent my knees slightly, as if somehow lowering my center of gravity would keep me safe.  I took baby steps working my way to the very edge, I leaned my head over the railing and looked down.  I felt a moment of panic, like when an elevator makes a jolt and there is a sudden flash of fear.

I could hear only the wind, as it barrelled through the canyon,  it flapped the hem of my jacket against my body and blew my hair into my face.  It seemed the wind had blown my fear away as well because suddenly I felt calm and happy. I shouted to the wind, “look at me! I am doing this!”.

Standing out there in the wind I could see the beauty of the river below, and stare in awe at the stunning layers of red and browns in the rocks above,  below and all around me. We stayed for a few minutes, took our selfies and moved on.

I was more confident and comfortable with each step, finally free of the nervousness. We were enjoying the camaraderie of our fellow hikers, sharing stories of where we were from, and where in Spain we had traveled. I was having fun. Until we rounded the final corner.

At the point where canyon gets deeper and narrower  there was a bridge. That bridge had to be be crossed, to get to the other side of the gorge.  The bridge was more of a beam. A narrow steel beam, about two feet wide and thirty feet long, with holes in it large enough to see through to the river below. Along each side was one heavy gauge wire, waist high, that spanned the length of the bridge. Oh no.

The bridge was one person wide, and allowed  only one person at a time to cross. Hubby crossed first, to show me it was going to be okay. I was not convinced. Holding back my tears, I let a few others take their turn ahead of me while I bolstered my confidence.

My fellow hikers offered words of encouragement  “is okay, you can do”. But from the back of the line I heard “for Pete’s sake, go already”.  I was holding up the line.

I  was thinking to myself,” Okay,  I can do this, but how? Do I just go fast and get it over with? Or slow and precise, which means I will be out there, hanging in the air, for even longer?” What happened next is a blur. I remember taking a big breath and one step, then another, and another, until  finally there was the blessed feel of solid ground beneath my feet. I did a little happy dance, feeling very pleased with myself. I did it! Yay me!

There is a notice which says “persons of a nervous disposition” are advised not to attempt the walk. But I did it and I am proud of myself, for overcoming my hesitations and fears, and for not losing my Ray-Bans. I still don’t love heights,but I am eager to see where my vow to overcome my fears will take me next.