My daughter invited me to attend her bachelorette party. Forty-eight hours in Ensenada, Mexico. Me, and a dozen young women half my age, all of them ready for a fun weekend of dining, dancing and drinking. My goal was simply to survive.

The trip started off on shaky ground. Just hours before our departure, my daughter discovered that the passport she had packed was her old, expired one. Her new replacement passport was nowhere to be found. After many phone calls, online searches and tears, she decided that she was going to proceed with the plans already in place. She was going “take her chances,” and worry about getting back into the U.S. after the weekend was over. This was not good news. My family often referred to me as “Nervous Central,” and this was certainly something to be nervous about. But I decided to try to be cool, relax, and trust her judgement. So, on to Mexico we went!

The condo we rented shared a patio with the adjacent unit, which was occupied by three Latino business men. Our group of twelve, boisterous ladies commandeered the whole place. As we became too loud to ignore, our gentlemen neighbors came out to investigate. Soon we were a party of fifteen.

Our new acquaintances saw the brand of Tequila we were pouring, and they were appalled. “No, no Senora,” they informed me,” You must try this.” Then they introduced me to my new best friend, Evaga Tequila. This was the best I had ever tried.  And I have tried an abundance of tequila.

The evening was spent playing beer pong and flip-cup, as well as dancing and sharing stories about the bride to be. A few hours later I noticed that most of the other women had drifted off to bed. The condo was dark. Me and Evaga had closed down the party. Oops.

The next day was filled with activities. We hired a fourteen-passenger van, and a driver for the entire day. Julio was  our driver, interpreter and guide.  The first place Julio escorted us to was at the base of the mountains, where we rented ATV’s.

The next 2 hours were spent tearing through the dessert. Taking every turn at full speed, exploring ravines and gravel trails. By the end of the adventure we were covered in dust, with grit in our teeth and forearms sore from the constant vibration. It was great fun.  I took a moment to gloat when one of the other women told me I was a “badass Mom.” Yay me!

Our next stop was a downtown bar. We walked in still covered in grim, goggle shaped dirt marks on our faces and chewing on sand particles. It was obvious by our matching T-shirt and the bride-to-be’s headband veil, that this was a bachelorette party. A few shots and some great food later, we became part of the entertainment. I laughed and clapped when the whistle blowing, muscular male staff picked up my daughters and spun each of them around like a propeller over his head. But then he looked at me. Oh no.

The thoughts that ran through me head ranged from, “He has no idea how much I weight” to, “he is going to hurt himself if he does that to me.”  A minute later I was standing on a platform in the middle of the restaurant, being held, upside down by a hunky waiter. He spun me around like a prize wheel, as the staff blew loud whistles and fellow patrons clapped.  My daughters had sent video off to my husband before my feet even touched the ground. But I survived.

After a quick jaunt back to the condo, our group emerged dressed up and ready for a night on the town. I was ready for a nap.

Our dinner reservations were at an exclusive open-air establishment, high in the hills, overlooking the ocean. The restrooms were built into the cliff below the restaurant, each stall was enclosed on the sides, with one wall open to the expansive view. It was quite unnerving when a helicopter flew by and I made eye contact with pilot while I was in there. He actually smiled and did a little eyebrow lift of acknowledgement as he flew past. That was a one of kind bathroom experience.

After dinner Julio drove us back to downtown, where we spent the next few hours roaming from bar to bar. I trailed along behind the group, them in their high heels, me in my flats. Finally, thankfully, they were ready to go back to the condo. We bid Julio farewell, and turned in for the night.

The next morning, we packed up and said our good-byes, as we all headed for own homes. I began to worry and fret, thinking about my daughter crossing the border without a valid passport. The wait time at Tijuana was over two hours. As cars slowly inched towards the border, there were vendors walking between the lines of cars, selling everything imaginable. One of the young women in our group actually bought a puppy.

So now the car my daughter was in was attempting to illegally smuggle a dog into the United States. The closer we got to the gates, the more I worried. With the puppy on the floor under a blanket, my daughter smiled at the agent, and said she had accidentally 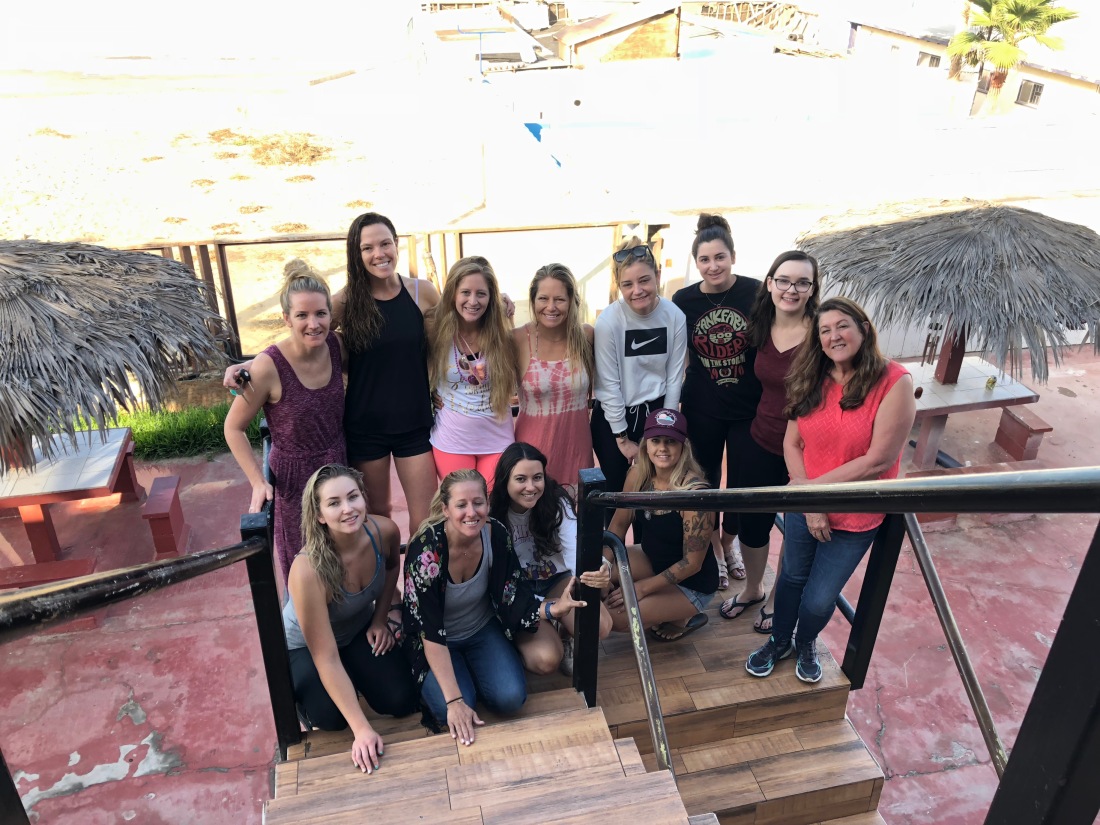 picked up her old passport. The agent looked at her passport, looked at her, and waved them through without hesitation. And just like that we were all back in the U.S., safe and sound. Hallelujah.

Not only did I survive the weekend, but I had a fantastic time. It was wonderful to get to know my daughter’s friends. I felt honored to be included, and relieved that I had not embarrassed myself, or my daughter. At least not any more than usual.