They were cute when they first showed up. Two wild ducks, waddling around, side by side on the grass, quacking up a storm. Within a week they had coerced me into buying them their own bag of food, and a plastic kiddie pool.

A few days later they began venturing from the grass onto the patio. It was a duck Poop-A-Palooza. Piles of green yucky goo all over the place. Every night, as soon as it got dark they would invade the porch, pooping and squawking with great gusto. Their favorite spot to sleep was against the door, near the lights from inside the house. I couldn’t decide if they wanted in, or if they were afraid of the dark.

In an attempt to keep their slime off the porch, I lined a dozen pinwheels all along the edge. I was sure that the noise and motion would deter them. They just pecked at the pinwheels, thinking I had given them toys to play with.

Next, I put out a fake predator bird, hoping it would scare them. The following morning I found the ducks sound asleep, cuddled together at the base of the plastic owl. There was so much poop, even the owl must have contributed.

Desperate for help, I turned to the internet. That led to a website that specialized in, “Predator Pee.” That’s right—they sell urine. Depending on the target nuisance, they recommend wolf, coyote, fox, or bear urine to frighten pests away.  I am not sure how urine is collected, but I do know, I don’t want that job.

I purchased an industrial sized bottle of coyote urine. I followed the directions and sprayed it around the “pee-rimeter” of my porch, the whole patio reeked! The ducks waddled right over it.

Accelerating my campaign, I procured a “CoyotePeeCoy.”  It’s a life size vinyl replica of a coyote, crouched and ready to attack.  Immediately after I staked the pee-coy on the lawn, the poopers walked right up to it to investigate. They seemed to enjoy all of the interesting things that kept appearing on their patio.

When I shouted at them to go away, they would run towards me, as if I was their long-lost friend. They heard “GO AWAY!” so often, they thought it was their names.

I tried to herd them towards the nearby river, hoping they would swim away. As they got close to the water’s edge, they turned and fled back to the house. They did not fly, they ran, away from the water as fast as their little webbed feet could carry them. They have never used their pool. They huddle under the awning when it rains. They won’t go into the river. They don’t like to get wet.

“Go” and “Away” disappeared one day. That night on my drive home, I saw them on someone else’s porch. They were snuggled together, out of the rain and sitting directly under the porch light, a couple of odd ducks, indeed! 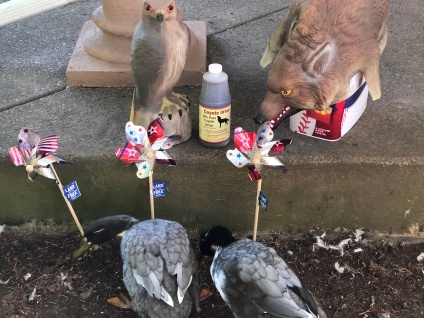