I have sipped my way through a sophisticated wine crawl. I have chugged along on a pub crawl. I have even done a tequila crawl after too much Patron. But this was my first yarn crawl, and I was nervous.

I had decided to travel to Portland, Oregon to participate in the, “Rose City Yarn Crawl.” I was determined to go all in, and do the ”Mystery Crochet Along” as well. That was where the nervous part started.

For the mystery along, I knew I would be making a shawl. What the finished product looked like was the mystery. The pattern was broken into “clues”.  The clues were released one at a time, starting a few weeks before the four day crawl began in March. The objective being to wear the completed shawl during the crawl.

I am a slow crocheter, very slow. And I have trouble reading and following patterns. Given that, what could I possibly have to worry about?

The yarn suggestions were released in November. I was in Portland that day, so off to the yarn store the Grandbabies and I went . The conversation in the car went exactly like this:

Child: Grandma, do you have yarn at your house?

Child: Are you almost out?

Child: Then why do you need more?

Me: Have you been talking to Grandpa?

In January clue one was released. I struggled with the pattern, it was beyond my skill set and out of my comfort zone, but I persisted.  My friend helped me understand the stitches, and she gave me a, “you can do it” pep talk . I finished clue one the night before clue two dropped. Okay, I have got this! By the end of clue two I had caught my rhythm. I was feeling pretty happy with myself.

I had a long flight the day after clue three was released. Six hours with nothing to do but play with yarn. Then the trouble began. I was sitting on a plane and I did not understand the directions. There was no one there to help me. Lost and alone in pattern purgatory, I decided keep crocheting  anyway. It’s not like the pattern police were going to come if I changed a few (or all) stitches, right? Who would even notice if mine was a little different? I stitched along, making it up as I went.

Naturally since my clue three was “freestyle”, clue four had to be as well.

I finished on time. Whew, I breathed a sigh of relief. My shawl was lovely, but it did not look like the ones posted on the community board.

During the crawl I was thrilled to see the talented designer of the crochet along pattern. She spotted my shawl, smiled and motioned for me to come over. Oh crap, there really was pattern police!  As I crossed the room, in my head I was frantically trying to think up excuses (lies) for having butchered her project. She looked closely at the stitches. Oh Lord, please help me! She said, “You did great, it looks wonderful”, as she gave me a hug.  In the photo you may notice my pained expression. That was my, “I am trying not to have a heart attack” face.

My favorite shawl was worn by a woman with the ball of yarn and knitting needles still attached. She hadn’t finished it, yet she wore it with pride. I wanted to run across the store and hug her.

As a group, yarn people are the best. Always loving and supportive of each other. There is camaraderie and kinship amongst total strangers. Driving in and around Portland I would know that I was getting close to a shop. I would begin seeing groups of women walking together, laughing, talking and wearing spectacular scarves,shawls and sweaters.

There are “passports” for the crawl. The goal is to get it stamped at each of the 11 shops then turn it in, with hopes of winning one of the abundant  yarn related prizes. Over 1,000 people completed their passports. I am proud to be one of them. What did I win? Only the knowledge that when I do it again next year I can be more relaxed. I know that the world is a warm and fuzzy place, when you are surrounded by yarn. 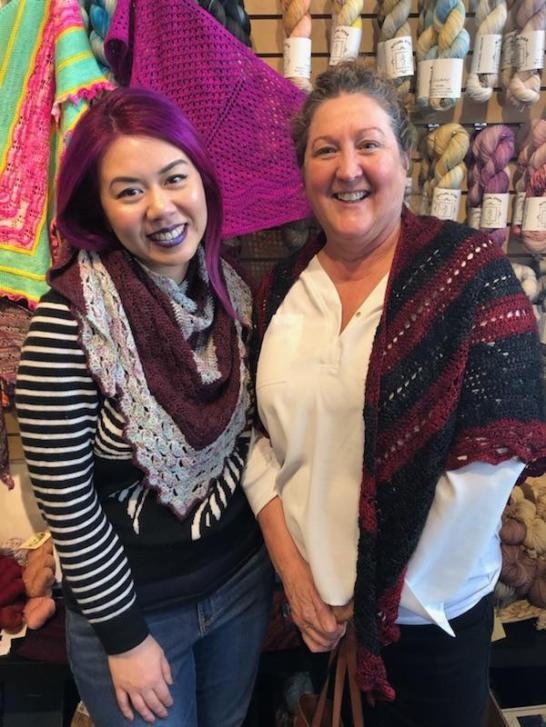