The smell of beer, mixed with vomit and urine, permeated the air.  I stepped gingerly around puddles, of who knows what, pooling on the ground. I wished that my toes were covered. Yuck.  Women all around me were lifting their shirts and showing their breasts, in exchange for worthless beads.

I was drinking a foot tall green beer, had some white powder on my nose, and wearing a brightly colored tutu.  And yet, somehow, I blended right in. This was St. Patrick’s Day in New Orleans.

Walking along Bourbon Street, in the French Quarter felt like diving into chaos. Music blared from every doorway. Rock, Reggae, Zydeco, Jazz, and Country; the beat changed with each step.  Alcoholic beverages beckoned. Frozen, blended, draft, shots, and delightfully fruity concoctions. Drinks named, “Hurricane, Hand Grenade, and Voodoo,” come in cups shaped like fishbowls and boots. So many choices! My favorite was the “Pirates Passion” with three types of rum. Yum.

Everywhere I looked there was something new and strange to see. Street mimes, drunks, bucket drummers, snake handlers, musicians, magicians, walkers on stilts and riders on unicycles. Some were looking for a few dollars, some just for attention. I had been transported into the center of a bizarre circus, never knowing what would be around the next corner, or lurking over my shoulder.

I paid a street artist named Jack, for a poem. He sat in the middle of the road, on a vintage schoolhouse chair. He typed using his grandfather’s antique typewriter. He crafted a wonderful poem for me about yarn, and the inter-weaving lines of a tale.

In the French Market I met a warm, friendly author named Beatrice.  She autographed her books, “The Chicken and The Egg.” My grandchildren were thrilled with the personalized dedications she wrote for them.

And of course, I bought yarn. At “The Quarter Stitch” I found a skein of raw silk fabric, knotted into ribbon. Its vibrant colors of green, purple and gold screamed Mardi Gras. I also bought some huge, hand carved wooden crochet hooks. That choice may have been an effect of the rum.

One afternoon Hubby and I were fortunate to score a prized table, on a balcony overlooking Bourbon Street. We watched in amazement at the humanity below. Drunks carried off in ambulances and way too many lifted blouses. Truthfully, Hubby did not think it was too many, maybe that was just me.

From the balcony we also witnessed a joyful wedding parade. A bride and groom danced in the lead, with the bride carrying an ornate lace umbrella. They were followed by Jazz musicians in dazzling white uniforms and gleaming instruments. Behind the music were the finely attired wedding guests, all dancing and waving white handkerchiefs.

The main event was the St. Patrick’s Day parade. Thousands and thousands of people lined the parade route. It began early in the day, and continued well into evening. Floats went by for hours, while the waiting crowds partied amongst themselves. The spectators were as much of a show as the official parade. Hair of every color in the rainbow. Costumes ranged from dinosaurs to bar maids, while singing and chanting came from all directions. There was even a tutu wearing Grandma dancing in the street.

New Orleans is also famous for its regional cuisine. There were food establishments that I would normally walk, or maybe even run, past as quickly as possible. Checking our fear, and our judgment at the door, we ventured inside. Once there we found wonderful food and friendly people. We ate Po’boys, sampled alligator bites, Jambalaya and Gumbo. I couldn’t get enough fried green tomatoes or beignet. Beignet is an amazing fried donut, heavily dusted in white powdered sugar. Eating them can lead to wearing them. I learned not to exhale too forcefully, wow can that powder fly!

If you go to New Orleans, I recommend that you don’t wear sandals, and do buy a tutu. I could lend you my mine, but I won’t. I like to wear it at home, dancing and singing, when (hopefully) no one is watching. 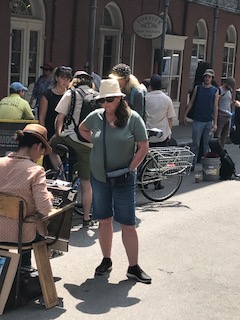